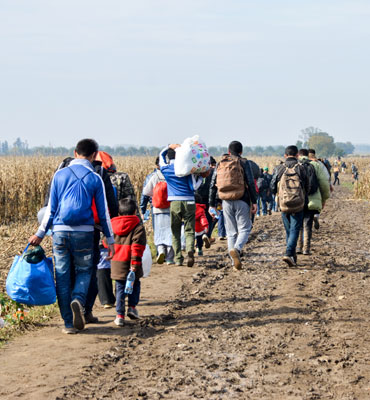 There is little doubt our country is becoming more weakened and dangerous due to the current surge of illegal immigration on our southern border. This illegal invasion, for lack of a better term, is greatly accelerated by changes in border policy, implemented by the Biden Administration. Our National Security is in peril as a result of these policies. The very real dangers that accompany illegal immigration are being visited upon every state in our nation. Some states, more aggressively impacted than others.

Mass illegal immigration guarantees higher crime rates wherever it is found. Having an open southern border incentivizes the Mexican cartels to expand their operations in human trafficking, which has proven to be more profitable to these cartels than drug trafficking. These cartels continue to engage in drug trafficking, primarily deadly fentanyl. With an open border policy however, trafficking in both drugs and humans have enriched their wallets beyond their wildest dreams. The cartels literally use women and children as the “gift that keeps on giving” trafficking them back and forth across the border with throngs of other illegals, many of them criminals, seeking to set up shop in our country.

Colorado is one of eleven states designated a “Sanctuary State.” It is believed to be among the top five in “safest states for illegal immigrants.” NGOs operating in Mexico serve the objective of preparing and informing these immigrants to the various financial benefits awaiting them in the United States and where they can obtain those benefits. The most attractive destinations offer the greatest reward, as well a safe haven from punishment for breaking our laws. Colorado is an illegal immigrant MAGNET due to this status and willingness to harbor, assist and enable illegal immigrants to gobble up resources on the taxpayer’s dime. The citizens of Colorado suffer the consequences, as their taxes increase, their crime rates increase and their cost of living continues to increase. All the while, their safety and security decrease. Adding insult to injury, when they dare to raise objection, they are labeled “racist” or anti-immigrant.

Colorado citizens are not anti-immigrant. They are anti-ILLEGAL-immigrant. They know the cost, the danger, the societal breakdown and loss of personal freedom that mass illegal immigration brings to their lives. They also recognize the unfairness of being punished and persecuted for wanting to preserve the well being and safety of their communities. The idea of a state being “sanctuary” for illegal immigration has no ties to virtue or compassion, despite being marketed as the prime goal of those who impose it upon us. For too long, our progressive leaders have gotten away with this deceptive marketing plan, intimidating law abiding citizens to fall in line and passively accept the consequences. After 18 months of a literal invasion of our country, and feeling the effects of “every state is a border state,” the people of Colorado are ready to reclaim the truth about illegal immigration. They are calling for an intervention of their inebriated leaders, drunk on power, who have slapped them around too long. They cry out for sobriety in leadership, and for this issue to be once again driven by reason and logic over irrational feelings.

Shana Black for State Representative – Helping Others While Fighting For You